This story is part of Notre Dame International's series titled "Women Who Empower."

This story is part of Notre Dame International's series titled "Women Who Empower."

Lisa Caulfield was eighteen when she first visited Connemara in western Ireland.

The first generation Canadian was on a trip with her family at the time. Her father is an Irish immigrant and they visited Ireland periodically over the years.

Located in the majestic landscape, she vividly remembers the view of Kylemore Abbey appearing seemingly out of nowhere on the drive out west. The fairytale setting inspired her to take a picture with her 90’s Nikon camera. As soon as she went back to Toronto, she decided to develop it and blow it up to a poster size.

Caulfield decided to continue her studies abroad completing a M.A. in modern Irish literature at the National University in Maynooth, County Kildare, Ireland. That’s when she was introduced to the University of Notre Dame at the annual graduate Irish studies seminar and spent 10 years working at the Dublin Global Gateway. When the University opened the Kylemore Abbey Global Centre in 2016, she was asked to lead the Centre as director.

Part of Caulfield’s job was to instill a trusting relationship with the Benedictine nuns and their Abbess. Kylemore Abbey, with its famous neo-Gothic castle, has been home to the Benedictine nuns since 1920, when the community relocated from Ypres in Belgium in the wake of World War I. Dublin-born Abbess Máire Hickey joined the Kylemore community 10 years ago after spending time as abbess at the Benedictine Abbey of Burg Dinklage in Westphalia, Germany.

The quote, “All things seem impossible until they are done” from Nelson Mendela became Caulfield’s favorite quote that she kept repeating to herself as she settled into her new position and oversaw the renovation of the Global Centre.

Those words stuck in her head as she found out that she was pregnant with her third child shortly after her appointment. She believes it also made her relationship with the Abbey and the Benedictine community a natural one.

“There is a sort of transparent female bond and ease to talk among women in leadership about communal goals and expectations,” she says, referring to her work with Abbess Máire Hickey and the Abbey.

“It is like a dance: you learn each other’s moves and eventually you find a common way of moving together. I really feel that now we formed a good relationship and partnership. I see Abbess Máire Hickey as an inspiration and a mentor and I think she sees me as some sort of wizard able to bring people here in Kylemore and to help choreograph the many achievements that we both are really proud of.”

Caulfield is always looking to the future, carefully planning programming that inspires people to visit the west of Ireland, much like she did as a teen. She is proud of her work and is steadfastly dedicated to her career, her family, and the mission of the University of Notre Dame. The most empowering part of her job is her ability to connect and curate new programs to enrich and inspire students, faculty, life long learners and contribute to the legacy of the Benedictine community at Kylemore dedicated to education. 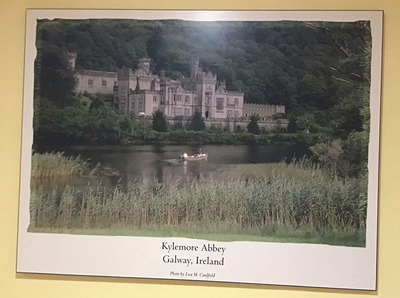 Caulfield snapped this photo during her first visit to Ireland. 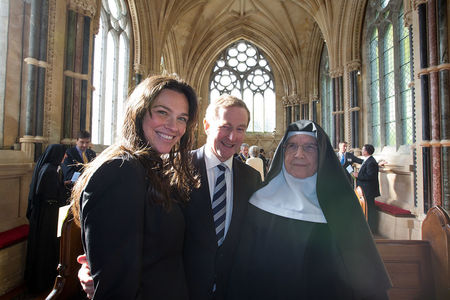 Caulfield is pictured with Mother Maire